Selection of TCA Board Leadership for 2020
The Foothill/Eastern Board of Directors unanimously selected Irvine Mayor Christina Shea as Chairwoman and Tustin Councilmember Chuck Puckett as Vice Chairman. On the San Joaquin Hills Board of Directors, Mission Viejo Mayor Pro Tem Trish Kelley was selected Chairwoman and Newport Beach Mayor Will O’Neill was selected Vice Chairman. TCA’s committee chairs and membership will be determined in the coming weeks.

Positive Performance Audit
At the December 12, 2019, meeting the Board of Directors of both Agencies discussed the findings and recommendations of a performance audit conducted by Crowe LLP. The audit concluded that TCA complied with all contract requirements and that no malfeasance by the Agencies or the contractor occurred. The Boards directed staff to bring the item back with assurances that the consultant also complied with the contract terms. This assurance was provided, and the Boards unanimously supported the item.

Accounting and Contracts Management System
The Board of Directors of both Agencies discussed a new contract with CentralSquare Technologies that provides for an upgrade to TCA’s financial accounting system. The system is currently supported by CentralSquare. Staff was directed to further refine contract terms, specifically the length of term, and return to the Boards in January for consideration of the contract. Staff was able to refine the terms of the contract without any cost increase. To further explore options for the Agencies’ long-term needs, TCA staff is initiating plans to bring on a financial systems consultant to conduct a comprehensive needs assessment that will be benchmarked against CentralSquare’s software solution and offerings from other system providers. This item, including a needed Fiscal Year 2020 budget amendment, was approved by both Boards. 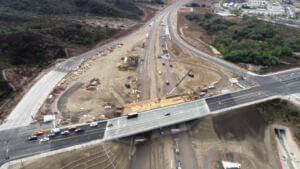 $38.7 Million Dollar Oso Bridge
Staff provided an update and authorized a design services amendment on the Oso Bridge Project. In addition to widening and sidewalk improvements, the Oso Bridge Project will allow users of Los Patrones Parkway to directly access the 241 Toll Road under a reconstructed Oso Parkway Bridge. Construction on the $38.7-million bridge began in August 2018 and is expected to be complete in September 2020. By Spring 2020, the roadway under the bridge is expected to open to the public while construction is completed. Once open, motorists will be able to drive signal-free from Cow Camp Road all the way to State Route 91 and beyond.
Contracts Approved
At their January 9 meeting, the F/ETCA and SJHTCA Boards of Directors voted to approve:
* A three-year contract with CentralSquare for system implementation and cloud hosting at a not-to-exceed cost of $303,000 per Agency, with two one-year options that would be brought back to both Boards for approval.
* An additional $287,480 in contract value for work performed by T.Y. Lin International, the engineer of record for the Oso Bridge Project.  The amendment will allow TY Lin to complete their work in providing design services during the final stages of construction. (This item was considered only by the SJHTCA Board of Directors.)

Click here or the image to open the FBN form.

For more information regarding all legal notices and instructions, please visit our Legal Notice Help Page.